The teacher is a mum too!

Learning to sign with my children through going to TinyTalk classes was such a positive thing for my family and me. Not only could my son communicate to me that he wanted milk, food, a drink, bed or that it was his nappy but I also got an insight into what else he was aware of; he signed 'windy' to me when the trolley was stopped under the air-conditioning unit in a shop, he told me that he was too cold in the swimming pool, commented when a noisy car goes past us and, often, that it was the dog that has made that smell not him! Attending classes is not a magic spell  to establish signing as communication requires practice on an on-going basis. Once it becomes a habit, though, the only thing holding you back is having a hand or two free to make a sign at the relevant time! Most of us would not care for a child without speaking to her as we go about our daily routine and signing is incorporated in just the same way. When my son was learning to talk I had a more accurate idea of the words that he was trying to form because he was signing them too. This helped me to reinforce the use of the spoken word. Similarly, our use of signing helped to clarify his understanding of the world around him; not every black and white animal is a cow and not every small fluffy one is a cat! To have a form of dialogue with your little one so young and to be able to see so early how their personality is emerging is fascinating and rewarding. Not only did I notice the absence of crying but how much fun and laughter we could have together because I could understand his view of the world. Happy, happy, happy. 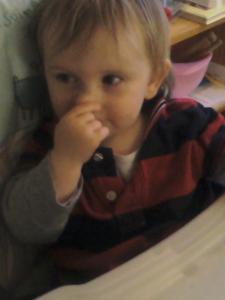 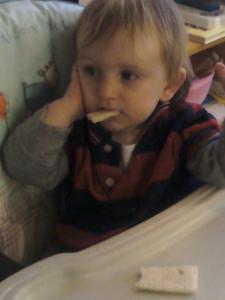 The telephone is ringing...

We love Katherines TinyTalk classes and would recommend them to any parents who are interested in interacting with their child by signing or singing. Signing as become part of our daily routine and it is great to see my son recognising familiar signs. We love the songs we have learnt at TinyTalk and sing them at home. The classes are always engaging with props and shakers. Thank you Katherine for the wonderful classes and for being so welcoming and accommodating.
Sarah,
Dorking

STORY: Books you recommended for babies...
Calm Down Boris by Sam Lloyd (Andrew at 12 months old)
Come on Daisy by Jane Simmons (Grace at 20 months old)
Peepo! Janet & Allan Ahlberg
Poo Bum by Stephanie Blake (Reuben at 16 months old)
Wow said the owl by Tim Hopgood (Reuben at 10 months old)
The Gruffalo touch and feel book by Julia Donaldson
Rumble in the Jungle (for 9 months plus)
Any book by Richard Scary (for 30 months)
Brown Bear, Brown Bear (for 12 months plus)
The Gruffalo, The Gruffalo's Child & Room on the Broom by Julia Donaldson (from 6 months)
Mr Brown can moo can you? Dr Seuss (involves lots of noises)
First 100 Words by Bright Baby (a picture dictionary)
Dear Zoo by Rod Campbell
Each Peach, Pear, Plum by Janet & Allan Ahlberg
Rhyming Stories - Pip the Dog & Freddy the Frog by Alex Scheffler